Colca Canyon may rank up there with one of the best lifetime experiences as a family.  As Colburn wrote, it was a confluence of events that left us elated, euphoric, and exhausted.  After leaving Colca, we headed off on a tourist bus to Lake Titicaca.   Lake Titicaca is one of those places that I have always dreamed about visiting – it seemed so exotic, one of those places you have to go just to say that you’ve been there (Timbuktu, Kathmandu and Zanzibar are similar locations).  But, in reality, after such an amazing experience as Colca was, we were disappointed.  Although none of us wanted to admit it, the most any of us can say was, “That was nice.” Part of what was disappointing was the level of tourist “blech” that we experienced.

When I thought of going to Lake Titicaca, I thought of traditional cultures that have maintained their authenticity through sharing it with tourism.  What we experienced instead was rampant commercialism interspersed with a small amount of authenticity.  You really had to look hard for authenticity and the bright spot was our home-stay family Rosa, Lucy and Roy on Isla Amantani.  This was our only “authentic” experience.

Leaving Lake Titicaca, we headed again on the tourist bus, to Cusco.  Until we reached Ollantaytambo, this had been the most disturbing experience so far in our trip.  Yes, it stops at nice places to see and breaks up the trip with a few stops, but yuck! being surrounded by tourists and fleeced for every penny was disturbing.  Every time we would stop, Mac would ask, “Do I have to get off the bus?”  It was painful to be herded like cattle and treated like idiots, one of the few experiences I regret.  When we finally arrived in Cusco, we were all relieved.  Cusco itself is a wonderfully historic city.  Touring the Cori Concha, wandering through old Incan streets, and getting to make our own chocolate bars from scratch – including roasting and grinding our own cocoa beans – was wonderful.

We then headed off in to the Amazon for some time in the jungle.  Although the area has a very well-developed tourist infrastructure, the experience was wonderful.  It did not have the magic of Colca, but seeing hundreds of Macaws, wild peccary, and the monkeys was energizing.  Our guide, Delford, was patient, knowledgeable, and really good with the kids. 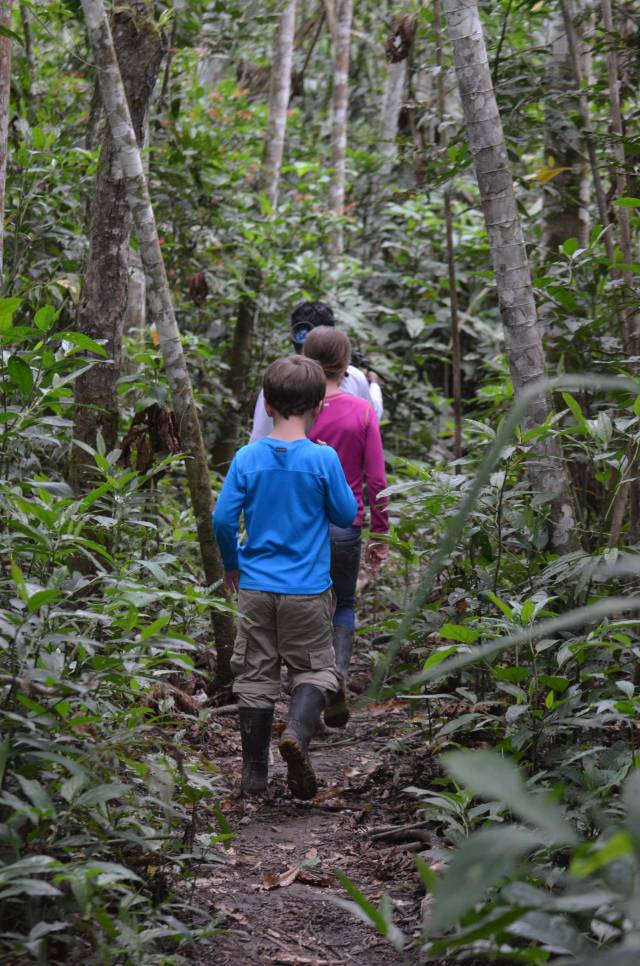 We were up at 4:00 every morning to make it to the clay-lick at sunrise.  The kids were amazingly engaged for such an early hour and the early morning was followed with multiple hikes and an evening event too.

Colburn and Lucia did a morning of “tree climbing” which involved ascending a 35 meter rope replicating the work of Macaw researchers.  Their strength and endurance was impressive – especially given the heat and humidity!

Our day out of the jungle was going to be a long one – we new that from the beginning – but we had no idea just how long it would turn out to be.  We were up at 4:30am to be at the boat by 5:00am.  Five hours later we transferred to a bus to go to the airport, arriving at 11:00am, two hours early for our flight which we then found out was going to be delayed at least 40 minutes.  Five hours of what became known as “hot.  sweaty.  waiting.” (think packed tropical airport without walls, fans or air conditioning) later, we were told that the flight was cancelled for “weather” reasons but that we could be booked on the same flight the next day.  Knowing that weather patterns often come in three-day patterns, we feared the same problem the next day.  Also, the town we were in is a working jungle town, not a tourist destination so there are zero hotels with air conditioning.   As we waited to talk to the gentleman at the counter, he suggested to another group of tourists that had been on the boat with us in the morning, that it might be possible to take a night bus back to Cusco.  They were heading out to Machu Picchu in a couple days and needed at least one day to acclimate so they were frantic to get to Cusco.  We were supposed to be going to our three-week volunteering experience so wanted to get there soon, but did not have a strict deadline. We did not, however, want to spend another night in the heat and humidity.

What followed is another one of those travel stories that will live in our memories forever – I just wish we had pictures to show.  Our group – three English women, a week-old newlywed couple from outside of London, and us, a family of four from Reno, piled in to tuktuks and headed off to the bus station to buy tickets.  None of the other folks spoke any Spanish and had not navigated the bus system in Peru (a little counter-intuitive until you’ve done it a couple times), so we were able to help get everyone settled (purchase tickets, pay the needed exit taxes, etc.) and ready to go.  We all had planned on being in Cusco that night so no one had food with us and the bus didn’t leave until 8:00pm, so we strided off to a local family restaurant we had seen on the main road.  We descended upon a lovely Sunday afternoon family gathering and promptly ate them out of house and home…..for $50….for all nine of us!  The food was wonderful – stuffed spicy peppers, grilled chicken, beers and sodas for all – and Mama Rosario was grateful for our patronage and we were grateful to the opportunity to see a different side of fellow travelers, the real life of a jungle town, and to experience the camaraderie of being thrown together with people you don’t know.   The company was wonderful, the bus ride harrowing, and the experience one that will not be forgotten.

After a day of recovery from our unexpected 27-hour travel day, we headed off to Ollantaytambo, a small town in the Sacred Valley, the valley leading up to Machu Picchu.  Strewn with Incan ruins, the valley is both beautiful and historic.  We had planned on having a home-stay, working with a relatively new English-immersion school and the local health clinic.  Unfortunately, poor execution on the part of the company we hired to arrange our volunteering lead to the first real “failure” of our trip.  We found ourselves with 2.5 weeks and nothing to do but a few smattered tourist experiences – a cooking class, a few Spanish classes and a wool-dying workshop – no actual volunteering.

Although disappointed, we restructured our thoughts towards enjoying this “time-off” and also doing some more hiking than we had planned.  This down-time has ended up being a blessing in disguise though as we have been hit hard by we have termed “The New Peruvian Weight-loss Plan”…. substantial gastro-intestinal distress for all of us.  Yes, we are disappointed that the company we hired to arrange our volunteering proved to be more of a post-sorority resume padding experience than a substantive volunteering opportunity, but we have been reminded of what I knew as a river-guide, “No matter where you go, there you are.”

Our time in Ollantaytambo was our second experience with the seedy underbelly of an area whose economy depends on tourism.  Much like Titicaca, the buses roll in every morning, disgorge their passengers to gawk around the town square for 30 minutes or so then pack them back up and head off to their next destination, with the tourists never really seeing what the town itself is like.  The tourists come in wearing their brand new adventure clothes with floppy brimmed hats perched dutifully on their heads with disposable water bottles in hand, then proceed to point at the locals and take pictures of them without asking, and maybe if the locals are lucky, buy some tacky cheaply-made souvenirs from a local tienda or a few snacks from the abuelitas which gather at the square.  After watching this a few times, we decided that it was like living at the New Jersey Port Authority – it is simply a place that people pass through, not really visit.  Even the kids were distraught at the behaviors.

The effect on the local town is one that can only be described as “disturbing”.  The local rural men come to town every morning to find work as porters on the Inca Trail.  Much like how the day-laborers line up outside Home Depot at home, these men are dressed and ready to go to work if there is work today, but there are few jobs and lots of people who are willing carry heavy packs for a few bucks.  If there is no work, it is a two-hour walk back to the village only to be repeated again tomorrow.

Repeated rejection and limited economic opportunities lead to substantial alcoholism and domestic violence in these remote villages.  We witnessed the alcohol abuse first hand during the annual anniversary celebration of the town – which was unfortunately our first day in Ollanta.   As we walked around the main square, we were struck by the number of cases of beer stacked everywhere and the number of people (both men and women) drinking heavily from large bottles.  While we watched a live band performance, we saw a group of 40- or 50-year old men literally pounding beers as fast as they could – it looked like a bad fraternity party for old guys.

A little later in the evening, the same men were falling-down drunk and one was still passed out face down on the square the next morning.  The kids were mortified; we were shocked as it is behavior unbecoming for anyone, but at 40 or 50, it seems especially wrong.  It ends up that the guys we saw drinking are all the local taxi drivers.  We couldn’t use them after realizing that’s who they were.  The following week was a similar experience when we went to the cemetery with our host family for the “Day of the Dead” activities.  In spirit, the Day of the Dead is supposed to be a time to gather as a family, remember your deceased loved ones, and spruce up their burial plot.  In reality, the path leading to the cemetery is lined with cases of beer being sold and people inside the cemetery are sending their kids to buy more beer.  The experience lost some of its romantic appeal when we saw the reality.

So we are now back in Cusco, enjoying the benefits of indoor plumbing, wonderful restaurants, lightening fast internet, and the anonymity that comes from being able to hide inside your own apartment for the evening.  Our whole time in Ollanta was plagued by GI and other illnesses, so we are trying to rid ourselves of the little buggers.  We have really enjoyed exploring the various ruins around Cusco – granaries, temples, terraces, fortresses, and ceremonial centers.  The kids can now differentiate the purpose of the Incan structure by the building techniques utilized, can discuss how the Inca rose and fell so quickly (it’s a fascinating story….just ask Mac) as well as the impact of Spanish colonialism in South America, and have mastered both ascending and descending incredibly steep stone steps safely.  We are looking forward to our time on the Inca Trail, our last big experience in Peru.

10 responses to Peru – the Rest of the Story