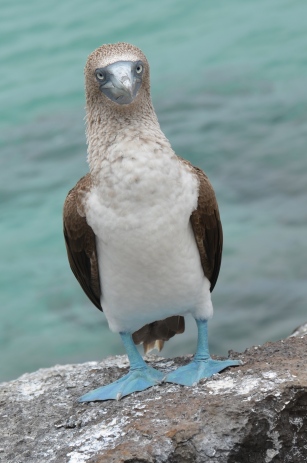 I am a total amateur naturalist hack, my children are clearer on some concepts than I am. Therefore, I do not claim anything I write can be thought of as fact, true or believable.  I couldn’t begin to compete with Mr. Darwin, the BBC or National Geographic.  However, I am on fire with fascination with the Galapagos – and, yes, most of what I am describing hopefully will make you want to look some of these ideas up on Wikipedia.

It has been a week since we left Otavalo, Ecuador – world of Otavaleńos, textiles, the Saturday animal market and smoky cool high altitude breezes.  We arrived Monday last week on San Cristobal Island and oriented ourselves to the Galapagos – I have had some difficulty knowing my cardinal directions – frequently I am stunned to see the sun setting in the east!  Once oriented, I relax and enjoy the incredible sunsets.

The Galapagos Islands, what we have seen so far, is mesmerizing.  There are several themes that have emerged from the first week that we expect will continue through the next three weeks we are on the archipelago – a shallow tabletop of islands 600 miles from the coast of South America.  First, the volcanic action that results from the smashing of three enormous tectonic plates in this location is omnipresent.  When you head to the beach or inland, away from the human developments, lava flows of various ages are everywhere.

It is important to know that the islands are all moving about seven centimeters per year in an south-easterly direction.  Therefore, the islands on the east side of the archipelago are the older siblings – San Cristobal and Santa Cruz being the oldest.  Our journey is from east to west – so, in theory, we are going forward in geologic time as we move to the far western islands later next week into the end of September.  We will be exploring Isabella – home of several active volcanoes – and also Fernandina – one of the youngest most raw and volatile of the siblings in the archipelago.  These volcanoes are the reason these islands exist – the lava flows over millions of years have accumulated over time.  The islands sit on a tabletop plateau, formed by the volcanoes, which drops precipitously on the western edge. These islands are also at the confluence of not only three smashing plates but also three significant ocean currents.

Second, four major currents impact the archipelago: Pacific, from the east, Humboldt, from the south, Cromwell, from the west and Panama from the northeast.  Each has its own season of ebb and flow – right now it is the cold/misty Garúa. Season, marked by the increased flow from the colder Humboldt Current.  The food and nutrients hit the shelf of the archipelago and upwells for feeding vast sea life.

Third, adaptation – I could go on and on.  My head spins with the fascinating examples of how land and sea life has adapted to the archipelago and, more specifically, have adapted to each island.

Giant Tortoises, there are now eleven species from the fourteen that once existed – all, I am reminded are descendants from a single ancient species which made it out here somehow – debris raft, floating island, who knows.  The shape of the tortoise’s carapace (shell) is a result of millions of years of the successful tortoises passing the helpful genes to their offspring.  If the food is high on bushes on a particular island, the successful tortoises have a shell that makes room for them to reach the food- therefore, they live, the ones with the wrong shell shape die.  The right shell shaped parents have kids who have the right shell shape – there, that was first attempt at explaining natural selection through transmutation!  Naturalists can determine the home island of a tortoise by the shape of their carapace.  Go research this- it’s fascinating.

Finches – good lord – it goes on and on.  The finches did the same thing as the tortoises.  One lone family of fiches were blown out to sea from Ecuador most likely and found a home on the archipelago.  As they spread throughout the islands, they encountered differing types of seeds, fruits or foods that began to select which finches would survive on that island.  If there were mostly hard nuts on an island, the parents with short crushing beaks survived and had kids with the successful beaks.  Those without the right shaped beak died.  There are over a dozen species of finches on the Galapagos now.  Several visit us in our apartment – they are fearless – as is most every living thing on the islands.  No need for binoculars.

Marine Iguanas – yes, there’s only one species and it inhabits only one place on earth – the Galapagos.  Somehow iguanas made it out here and they split into two species – land iguanas and marine iguanas.  The ones which could deal with the harsh saltwater survived and have thrived on the coast – eating sea lettuce and green and red algae.  They can swim really well – only with the swish of their tail.  From a distance, with the head out of the water, they look like a cat swimming.  The marine iguana expels the excessive salt in their system by sneezing the salt out of their nostrils.  So, as you walk the tide pools, you will usually first notice a colony of marine iguanas by the sounds of sneezing.  Otherwise, they are so well camouflaged you are likely to come close to stepping on one.  Since they are exothermic, they spend a lot of time on the hot black volcanic rock or sand sunning themselves.  The cold pacific water sucks the heat right or them, as it does Mac and Lucia.

Lucia and Mac are right there with us on this expedition – they are excellent naturalists – curious, fun loving and relaxed.  We have to find thicker full coverage wetsuits, as the shorty wetsuits we brought with us are not warm enough for Mac and Lu.  They come out of the waster blue-lipped and shivering but excited with stories of what they saw underwater.  Lucia spent a few minutes swimming with a Galapagos Green Sea Turtle.  Already cold and blue, when we spotted the turtle from the sea-kayak, she hopped back in, not wanting to miss the chance to see one up close.  Mac wanted to see a Marine Iguana eat.  So, yesterday, on the rocks at low tide the iguanas began heading out to the exposed edge of the rocky coast where they found sea lettuce.  Mac watched.  Blue Boobies fly by or sit on nearby rocks – I have not pulled out my binoculars that often.  At a startling frequency, the life on land and in sea is fearless of us – indifferent to our presence.  The finches, boobies, fur seals, tortoises and turtles, to name a few, keep doing their thing as we sit, swim or walk by.

Finally, the place is both a convergence and a divergence.  Plates and currents meet here, yet the life that inhabits the islands have undergone a long drawn out separation from their ancestors to survive on their assigned island.  All these animals I have described are neighbors on islands of the same archipelago, yet so far away from their distant descendants just across the channel – separated by millions of years of divergence.

9 responses to No Need for Binoculars