The bicycles are now dirtier, worn and yet still running smoothly despite our 1650km of trails, paths, roads, and sidewalks. The worn tires tell a bit of a story. It was in the Alps when we began to see the tires show the mileage and make us see just how far and over how many types of paths we are traveling. During our three-week trip through the region, the water fountains, train travel, and spectacular scenery were the constants of our time.  Yet, it happened so quickly and now I am trying to recall the details of a unique area of Switzerland, the lower Engadine Valley in the ancient region of Rhaetia.

After nearly a week in Strasbourg, France and Stuttgart, Germany, we headed south on the Rhine to Colmar and then to Basel, Switzerland. In our planning, we mapped several ways of bicycling from Basel to Luzerne, yet all of them were mountainous and involved significant elevation. Pulling a trick out of our bag from our Rhine trip in 2014, we booked a train to take us from Basel to St. Moritz – to the headwaters of the River Enin Switzerland. It becomes the River Inn once we crossed into Austria. The four-hour train trip not only was a huge convenience, but it also provided a stunning, UNESCO-listed, ride into the Alps through Landquart, Chur and through the Albula Tunnel. There were dozens of bridges, waterfalls, and tunnels on the spectacular route. This allowed us to begin near the headwaters of the En river and take advantage of the valley it had carved through the Alps. 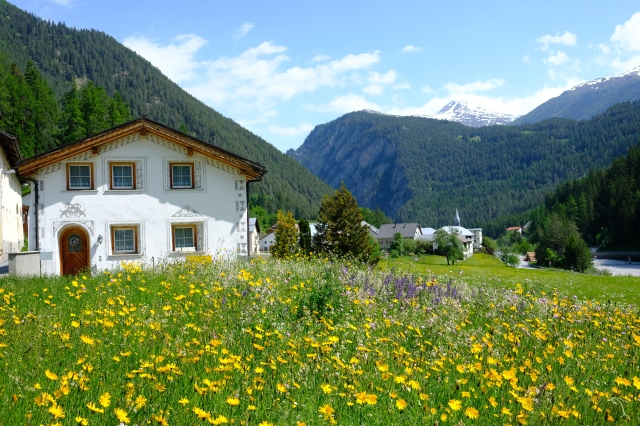 We caught the cycle path in St. Moritz and followed it for 250 km through Innsbruck until Jenbach. This path was frequently flat and paved, yet, there were episodes when the path became a trail and headed up onto the hillside to climb over a deep ravine or construction diversion. The forested paths were quiet, cool and covered in pine needles. We saw very few bicyclists. Occasionally, we were riding along the train route clearings seeing the tourists in the train cars enter or emerge from tunnels – both of us marveling at each other’s circumstances. I can just imagine a person on the train exclaim, “…hey, look, there are bicyclists up here.” More frequently than we had anticipated, the cycle path climbed out of the river valley to rise gradually several hundred meters in elevation. 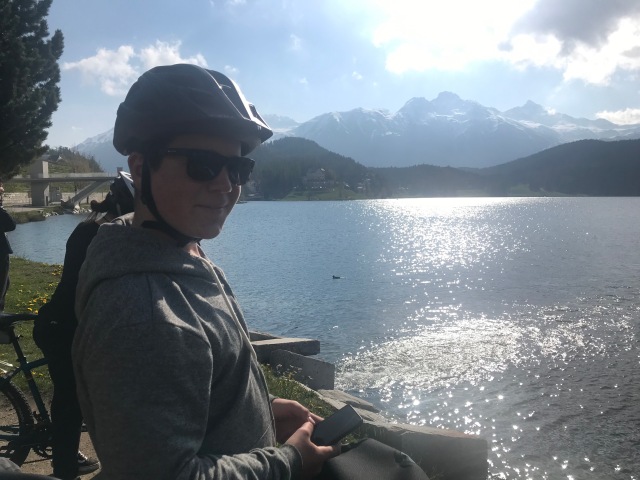 One of these elevation-days sticks in all of our memories – riding through Guarda. It’s not only memorable for the physical challenge and spectacular scenery but memorable for the cultural world we entered. The Romans had used this same path, the Via Claudia Augusta, through the Alps to get to northern Europe and if you are paying attention, you can see the influence everywhere you look.

The devil was in the details on our day from St.Moritz to Scuol. In our calendar, the event of the day read, “St. Moritz to Scuol (70 km downhill).” Frequently, from a macro point of view, we would make these general notations to be able to plan a multi-week schedule. However, in St. Moritz, Deb, who had been examining with great granularity our route to Innsbruck, called us together to describe our next day of biking – we had 70 km of linear distance, but we will encounter 1,000 meters of elevation gain. We were dumbstruck. After much rumination and examination of alternatives, we all decided to accept the day – regardless of its challenges. We all concluded it was possible and a challenge we were willing to try. St. Moritz to Scuol was our most challenging day on bikes yet. 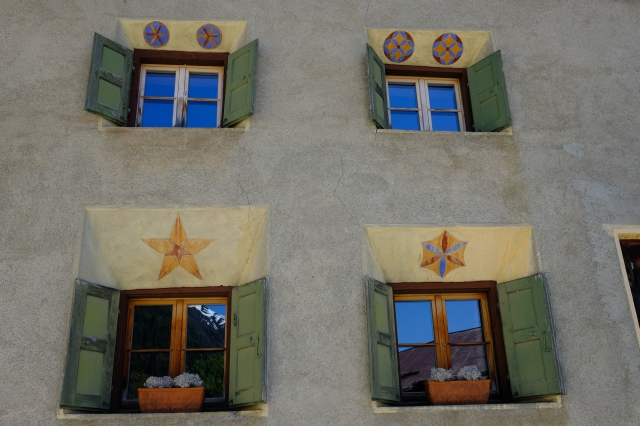 Leaving St. Moritz, we entered another country it seemed; this was the Lower Engadine valley, a remnant of the ancient state of Rhaetia where Romansch is spoken. The Romansh language is another remnant of the type of Latin spoke by the common people of the Roman Empire. It’s spoken by 50-70,000 Swiss and is one of four national languages of Switzerland and seems to be a mix of them all. In this area, you would hear it on buses, at the market, at restaurants, and on the bike path. The paintings which adorned homes, especially in Scuol and Guarda, were unique and clearly influenced by Roman history. Earliest house decoration date from the 11thcentury but became common in the 16thcentury. An example of sgraffito might include fishes, fanciful beasts, suns, stars. This is a region where folk artists centuries ago displayed their craft through furniture but also exterior walls. In addition to patterns and pictures, there are often texts in Romansch.

On our approach to Guarda, the En Cycle Path became a single lane gravel country road, which I later learned is called the Hohenweg Engadin, the high route, that gradually rose out of the valley, through cow pastures and climbed to the small hamlet. This was where we experienced the majority of our day’s elevation gain – 600 meters. This was also the day we discovered that everyone, at least it seemed everyone, was now riding European bike routes with E-Bikes (bicycles with a battery assisted motor). As we were climbing to Guarda, a German couple stopped and remarked on our efforts riding up to the town. They were on E-bikes and were not even breaking a sweat. Along the road through cow pasture, wildflowers and meadows was one especially wonderful fresh water spring. Cold, clear and clean, we refilled our water bottles, doused our heads to cool down from the effort of climbing.

In Guarda, we were met by another freshwater fountain in the town center. The water wells of Switzerland and Austria are ubiquitous. From the largest cities to the smallest town, we passed dozens of fountains, or brunnen, on our trip through the Alps. The water is perfect – clean and cold – and these brunnen became a welcome stop on our days of bicycling. Frequently festooned with flowers, ironwork, wood sculptures, and polished stonework these fountains helped us stay refreshed and hydrated. 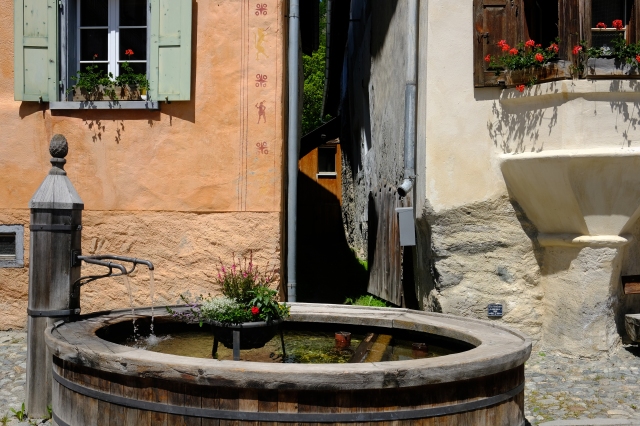 One more challenge – now called the “twelve kilometers of tunnel terror” – and one comforting moment was portioned out to us on this day to Scuol. The main highway was under construction and was closed causing significant traffic to be diverted to what is usually a quiet country road that would be an excellent option for bicycles. Yet, with the added traffic, a 6% incline and two hillside tunnels to navigate, this became the most difficult and dangerous 12 km of the trip. We all had high visibility vests, helmets, reflectors. We steeled ourselves as cars, buses, and trucks passed carefully, but sometimes so close to us you would be pushed to the side by the displaced air. Each of us had to focus their vision on the white line and the wheel of the bicyclist in front of you. It had us all having flash-backs of roads in Ireland. Each day, we speculate what our lunch stop will be – buy food now or find a restaurant along the way. Today, Deb had scoped out a restaurant along the route. Was it open by noon, who knew? 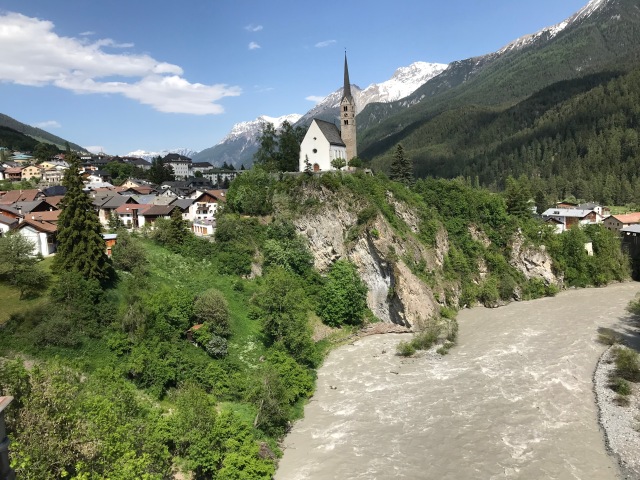 Just meters from exiting the second tunnel and finding the top of the hill was the restaurant. The chalkboard out front said geöffnet, open. We entered the small courtyard looking like rabbits who have just outrun a fox, but the two women, likely friends, welcomed us warmly in German. We shared some words in German and Romansch and they were surprised and delighted. It was a sunny quiet table for lunch with two kind women.

4 responses to The Alps Part I: Switzerland